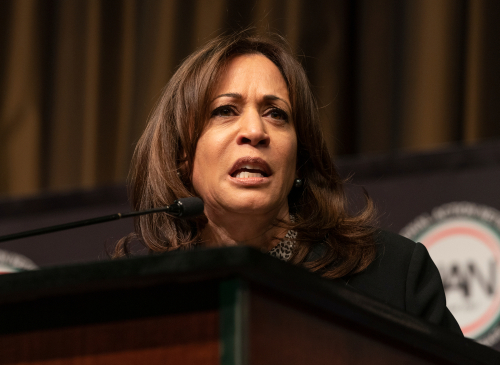 A US senator’s campaign stop was hijacked by an animal rights activists who stormed on stage in the middle of Q&A session.

Senator Kamala Harris was stunned as Direct Action Everywhere protestor Aiden Cook jumped on stage wearing a “Join the Animal Rights Movement” T-shirt and grabbed the microphone from her.

But the senator’s husband and security guards leapt on stage to stop Cook who was dragged away and thrown out of the building in San Francisco.

Senator Harris had been discussing the gender pay gap when Cook, 24, took to the stage, declaring that he wanted to turn her attention to a “much bigger idea.”

There was momentary concern and bewilderment before moderator Karine Jean-Pierre bravely blocked his path and the senator’s husband and security stepped in. Senator Harris then left the stage as a security precaution.

Cook’s actions were part of a wider set of protests in the city organized by the Direct Action Everywhere, who said in a press release that their intention was to get animal rights on Democrat agendas.

The forum was hosted by Democratic-leaning organization MoveOn, who apologized to Harris for the security breach.

Following the incident Twitter users praised husband Douglas Emhoff for stepping in when he did.

Said one: “When the protester rushed @KamalaHarris at the @MoveOn event, Harris’ husband @douglasemhoff helped pull the guy off stage.”

Another tweeted: “Nothing about this was OK: Grabbing mic from @KamalaHarris; ignoring other women on stage; insisting his voice mattered more; resisting efforts to usher him off. @K_JeanPierre you were mighty. @douglasemhoff, you were *that* husband, in the best way.”

‘Thanks for all the kind notes,’ Emhoff wrote. ‘We are good. I love Kamala Harris and would do anything for her.’

0 comments on “Activist Dragged Off Stage after Hijacking Presidential Candidate”