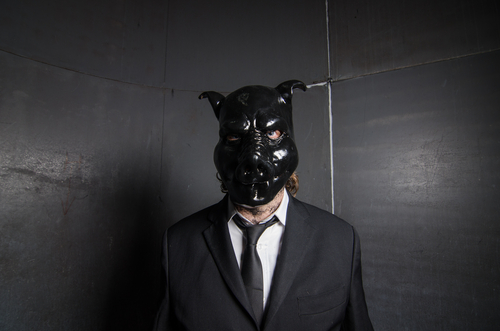 A WOMAN in a pig mask was among more than 20 animal rights activists who stormed a branch of McDonald’s.

The woman smeared fake blood on the floor and sat in it before being arrested by police.

Another said: “What did this achieve, other than wasting police resources?”

The group posted a picture of the protest on Twitter and wrote: “We had our first arrest tonight.

“We will do what ever it takes to STOP the needless, systematic abuse of animals.”

It was the latest incident in a wave of attacks by the same organization, Direct Action Everywhere that has staged protests in Waitrose, Jamie Oliver’s restaurant, and the Touro steakhouse.

Last month the group stormed a branch of Greggs in Brighton to protest the sale of meat despite the bakery boasting of huge sales of their vegan sausage rolls.

A spokesman for McDonald’s said: “’Due to the mess and damage caused, the restaurant was closed from 7:30pm whilst the team worked hard to return the restaurant to normal and we reopened at 5am the following day. We are supporting the police with their ongoing investigation and apologize to any customers adversely impacted by this incident.”