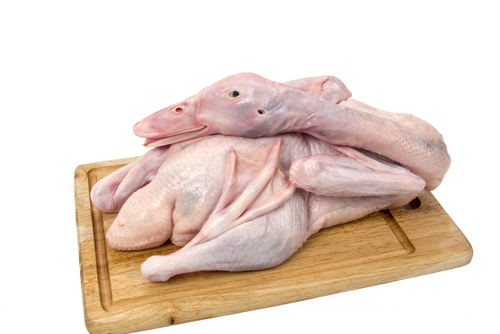 A top London chef waved dead ducks at activists after they stormed his restaurant.

Clément Leroy brandished the carcasses at members of the notorious group Direct Action everywhere when they stormed his London eatery. They had forced their way into the high-end brasserie called The Square in London’s Mayfair as part of a demonstration against the restaurant’s use of foie gras on its menu.

However, Chef Leroy, who is described in the Michelin guide as “a proud Frenchman, keen to celebrate the UK’s wonderful produce” had other ideas.

Rather than simply calling the police and having them removed he attempted to reason with the protestors by bringing some of his fresh produce from the kitchen to show them how much respect and attention he paid to his produce, including the ducks that the produce the foie gras.

One Direct Action Everywhere activist said he had been “stunned” and thought the chef was trying to taunt him. “This guy seemed to be proud of the cruelty involved”, he said.

But Chef Leroy said that he had simply wanted to convince them of his support for good animal welfare.

He said: “I wanted to show that we are using the best quality of meat. The ducks we use are the most expensive in the world.  They are from people who have a love for animals. It’s not like the picture they showed.”

“They were a little bit aggressive. They were screaming in the restaurant ‘you’re a criminal because you are selling meat’. I can understand every point of view but what I don’t accept is to come in restaurants to make trouble. For me, it’s not democratic.”

Activists claim foie gras, which is made from the liver of duck and goose, is unacceptable because the birds are force fed to produce the luxury food.9

0 comments on “Protest is a Dead Duck”