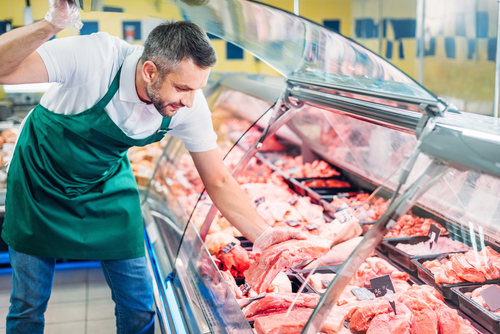 BUTCHERS and shoppers turned on vegan activists who attempted a sit-in protest at a city-center market in the UK.

The activists got more than they bargained for when they were jostled and shoppers drowned out their chants with chants of their own.

Some shoppers chanted “Meat is not murder” and another made an impromptu placard saying: “Sorry we killed the cow…but it was eating your dinner.”

Activists from Direct Action Yorkshire were stunned by being ambushed by shoppers in Sheffield. They had harassed customers at several butcher stalls and used a megaphone to chant offensive slogans at staff.

Police were called after a blind vegan campaigner was knocked to the ground during the confrontation—though he was unhurt and no one was charged.

Direct Action Yorkshire is an offshoot of an international campaign to promote veganism.

The protesters surrounded themselves with police-style tape and filmed the confrontation. Shoppers who insisted that they were defending local businesses soon challenged the vegans.

In the video footage, one man tells the protesters: “The state of you, putting all these people out of a job. You are a disgrace.”

Belinda White, 48, a protester, said that group members had been shaken by the response. She said: “There’s a long strip of butchers at the Moor Market so it was a really good place to do a demonstration. The whole point is to go to places that normalize abuse, promotion and sale of beings.”

A spokeswoman for South Yorkshire police said: “Officers received reports of an assault at the Moor Market in Sheffield. It was reported that a 53-year-old man was pushed to the floor. The victim didn’t sustain any injuries. Officers interviewed witnesses and reviewed CCTV footage in the surrounding area. There was no evidence to support the investigation, which has now been closed.”

0 comments on ““Sorry We Killed the Cow—But it Was Eating Your Dinner!””