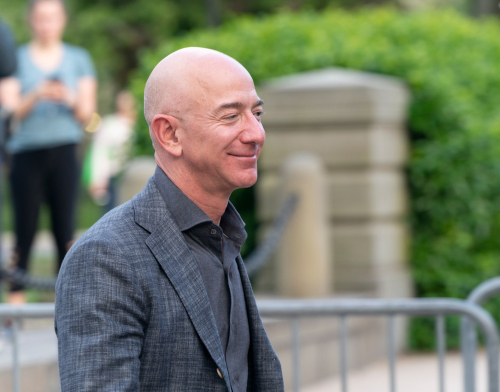 AN animal activist ambushed Amazon boss Jeff Bezos when she stormed the stage at his company’s conference.

Priya Sawhney, 30, strode towards the Amazon founder and world’s richest man, briefly evading security officials. She appeared to trying to offer Mr Bezos a flower but security stepped in and grabbed her before she got close.

Direct Action Everywhere later said it was behind the stage invasion, which was aimed at protesting against an Amazon contract with a California chicken supplier.

Sawhney, from Berkley, California, now faces charges of false identification after gaining access to the $2,000-per-head conference in Las Vegas.

As security stepped in to arrest her she shouted: “I have been inside Amazon’s chicken farms where animals are criminally abused. Jeff, you are the richest man on the planet. You can help the animals.”

Bezos and Jenny Freshwater, another Amazon executive on stage at the time, sat calmly as the activist was removed.

Bezos was explaining plans to send satellites into space when Sawhney appeared on stage. He remained seated opposite a moderator while Sawhney was removed and detained by police.

Direct Action Everywhere previously caused a security alert when one of its members, Aidan Cook, 24, stormed the stage during a political event in San Francisco.

Senator Kamala Harris was onstage when Cook grabbed the mic from her and started speaking to the crowd before being bungled away by the security and the senator’s husband.