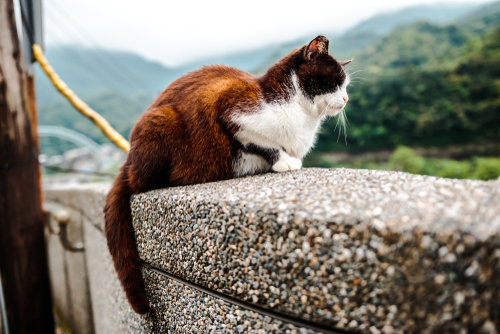 A CAT at the center of a £5,000 rescue mission returned home after spending six days on a railway bridge. Hatty, a five-year-old Maine Coon-Serengeti cross, had been perched 100 feet up on a ledge of the Brunel Bridge in Plymouth, UK.

Thousands of people followed her plight online and as crowds gathered to help some even tried to send up food with catapults. Fire crews and the RSPCA were dispatched.

One firefighter climbed a ladder with a bag of treats in an attempt to coax her down. But all attempts failed and Hatty was last seen peering out from a crevice.

Fire crews called off the rescue planning to return the next day.

Train line operators Network Rail were even making arrangements to close the line so she could be reached from the track.

But at 11.30pm at night—after having been missing for six days—Hatty appeared back at home – with evidence she’d eaten a seagull to stave off hunger pangs.

Owner Kirsty Howden, 39, from Saltash, Cornwall, said she was “shocked and elated” to later find Hatty had somehow climbed down and returned home.

She said: “Hatty went out on May 10th and didn’t come back. When she hadn’t returned in the morning for breakfast, I knew something was wrong – she’s a cat driven by her stomach.”

“I put some messages on Facebook and kept looking for her, but then I bumped into a friend who said they’d seen pictures of a cat stuck on the Royal Albert Bridge which looked like Hatty.”

Once the cat on the bridge had been identified as Hatty, the RSPCA and fire brigade mounted a combined rescue operation to help get the stranded puss down, but were unable to reach her small perch.

Howden added: “When I shouted she stuck her head out and meowed. She was so high up that I knew we’d have serious issues getting her back. The RSPCA and fire brigade came down to help save her, there was a huge rescue effort, but she just kept taunting the firefighters – she’s pretty mischievous and high-spirited.”

Howden said she had gone home for a nap before returning to the rescue site when she heard a meow. She added: “I thought I was going bonkers by this point – but I went to look and there she was. She had obviously just walked past everyone and come home because she wanted feeding.”

Hatty has now had a full check up at the vets, and is “a bit bedraggled,” but is physically fine.

There’s a Cat Stuck Up My Tree….a Great Big One!

0 comments on “A Bridge Too Fur”