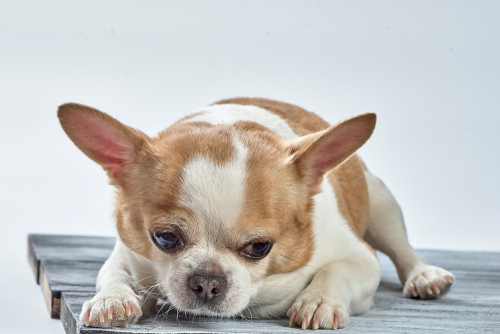 AN orphaned Chihuahua has been adopted after staff at an animal shelter nursed her back to health.

The puppy, named Pippa, was seven weeks old, severely malnourished and completely hairless when she arrived at the Atlanta Humane Society.

As vets began caring for her they discovered her tiny body was covered in scabs after becoming infected with mange.

But little Pippa’s luck began to improve when she was fostered by Amanda Harris, who took her home and gave her round-the-clock care to help nurse her back to health.

Pippa shared her first foster home with Amanda’s two other dogs, one of which was an 80lb Pit Bull Terrier. But tiny Pippa didn’t let her newfound big siblings bother and chased them around the house, cuddled them and  held her own in a game of tug-o-war!”

Pippa also became something of a social media star, a newfound fame that eventually led to her finding someone who wanted to take her in permanently.

Amanda said: “Her care included weekly medicated baths, medication to heal her skin and proper nutrition. Once she began to get proper care, her skin started healing remarkably quickly. She loves burrowing in blankets and cuddling more than anything in the world. There were moments where I’d peek in on her and wonder where she went, only to find her comfortably nestled under all her blankets. It’s super adorable.”

Pippa’s new owner, Terri Dickson, has formally adopted her and says Pippa is already part of the family.

She said: “When I saw the pictures of her as she first arrived, I had to go see her.

“Once she was in my arms, it was all over for me. Best decision I have made in a long time. She is incredible.”