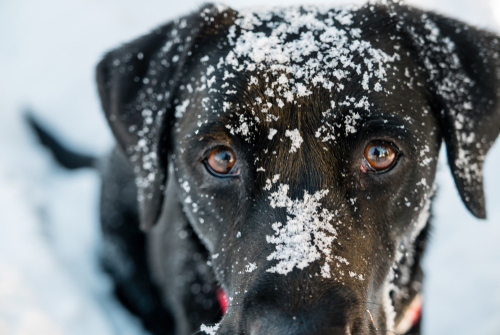 A terrified and abused puppy abandoned to freeze to death by a roadside has been nursed back to health.

The battered and bruised dog, who vets estimate was just seven months old, was found huddled in the snow at on the side of a lane in St Louis, Missouri.

Now named Weezer, the pooch was rescued by Donna Lochmann, from Stray Rescue of St Louis, after she heard him whimpering.

Donna said: “This poor soul completely broke our hearts in two. He was shivering and screaming in fear.”

Donna used her phone to film the moment she found Weezer. The poor puppy is  shivering and howling as Donna approached but he visibly relaxed and began wagging his tail once Donna got him into her warm car and reassured him.

Weezer was covered in cuts and bruises when he was rescued and was sent to a medical foster home following his rescue.

After treating him for a fleas, malnutrition, and a skin disease caused by a harness that had been left embedded around his body, Weezer made a full recovery, and, in a happy ending, was finally fostered by a new family.

Doris Gets Her Legs Back