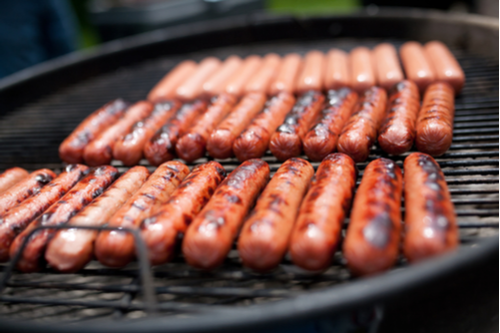 A man infuriated activists when he served up sausages and burgers outside an animal rights protest.

The meat sizzled as he flipped sausages much to the annoyance of protestors who had besieged a slaughterhouse.

The man turned up at the protest in Burlington, Ontario,  but protestors looked on in disgust as he served up free sausages and burgers to passers by.

Eventually they confronted him but the burger man shouts at them: “I’m trying to have a barbecue.”

He appeared to enjoy annoying the activists and then eats a sausage in front of them while one of his friends shouts “Hot dogs…free hotdogs.”

He then starts offering hotdogs to passing motorists who start brandishing them at the protestors.

What amounted to a protest against the protestors took place outside Fearman’s slaughterhouse, which is regularly targeted by activists.

It is not the first time meat eaters have got under term skin of vegan protestors.

A man once ate a virtually raw steak at a vegan festival while wearing black vest with the slogan “Go vegan and die” on it. He was questioned by police after vegans complained about his protest.

They said that there was blood dripping off the piece of meat as they queued up to enter the Vegan Food Festival in the Dutch capital city of Amsterdam.

0 comments on “Burger Man Flips the Script on Vegans!”