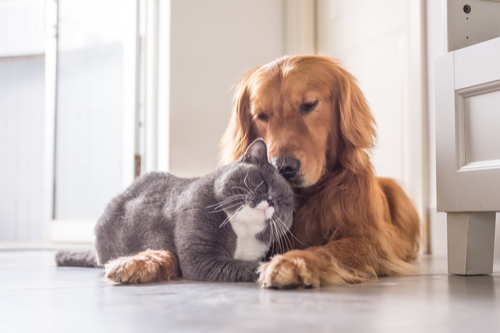 A woman who thought her cat and dog hated each other was speechless when she spotted them cuddling up.

Jordan Ireland, a student from Colorado found her furry pet cat Pumpkin and Labradoodle Maggie in a warm embrace when she arrived home from her studies. Before then Jordan had been under the impression Maggie and Pumpkin simply tolerated each other.

When they first met they hated each other and didn’t get along at all.

But as time passed they appear to have mellowed – without Jordan really noticing.

Then Jordan arrived home unexpectedly and caught them in a loving embrace.

Jordan said: “They typically chased each other up and down the hallways and stairs.”

Jordan, who managed to capture the sweet moment, posted it online with the caption “Did my dog just pet my cat?? And did my cat just hug my dog??”

In the video, Maggie strokes Pumpkin’s back with her paw and Pumpkin wraps her paws around Maggie’s chest.

The cute video soon became an internet sensation, gaining over a million likes in just over a week.

One internet user said: “This made my whole 2019 already.