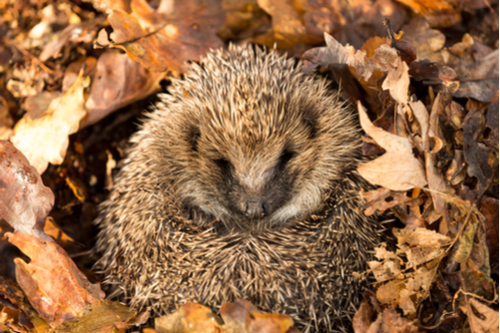 A rescued hedgehog called Chunkie has become so fat that he cannot curl up into a ball and hibernate. He is now being taken to a hydrotherapy pool where it is hoped regular swimming sessions will help him slim down.

He became so fat he even needs ramps to get in and out of his hutch in Bishop’s Stortford, Hertfordshire, UK.

Lynne Garner, who has run the Herts Hogline charity said she thought regular swimming could help him lose his bulk.

She said:  “Chunkie is trying to hibernate but he can’t at the moment because he is too fat to curl up properly. Hedgehogs need to be able to curl up before they go into hibernation, so obviously this is a problem for Chunkie as he is now. Hedgehogs are quite good swimmers, so some time in a hydrotherapy pool will do him some good and burn off some of the extra weight.”

She said that Chunkie might have a problem with one of his legs, meaning he hasn’t been able to walk enough to burn off his extra calories.

Hedgehogs curl up into balls to protect themselves from predators which are faced with a ball of 5,000 spines but Chunkie cannot get into a full ball, leaving part of his stomach exposed.

Hedgehogs eat up to 40 slugs a night and also tuck into worms, snails beetles, spiders, earwigs and caterpillars.

0 comments on “Chunkie the Hedgehog Too Fat to Hibernate”