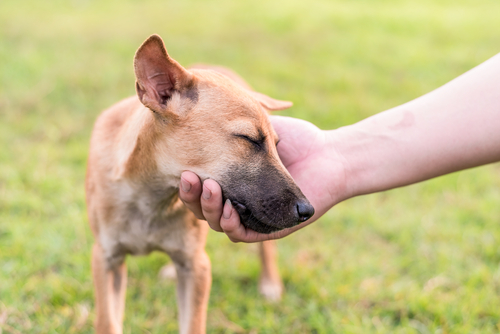 A deaf man has told how he is teaching his deaf puppy sign language.

Nick Abbott, 31, from Maine, read about the black Labrador on the Facebook page of NFR Maine, a local dog rescue center.

The pup, named Emerson, had been rescued when he was just six weeks old. Since his adoption, Mr Abbott has taught Emerson basic commands which he has learned and responds to.

The letter S means “sit” and sweeping his hand across in a straight line is “lie down.”

Emerson has a series of health problems as well as being deaf and has experienced seizures and has been diagnosed with an infection known as canine parvovirus, a contagious virus that can be fatal if left untreated.

All of Emerson’s siblings had been adopted quickly, and staff at NFR Maine feared Emerson would be left without a family to go to. But it was his deafness that caught the attention of Mr Abbott.

When he first met Emerson he said the pup walked over to him and sat at his feet. He said: “He kind of picked me. And I knew right then and there that we would get along and understand each other pretty good.”

Within weeks, Abbott had put in a formal request to adopt Emerson.

Lindsay Powers, from NFR Maine, spoke of how delighted she was the Emerson had found a family. She said: “He had such a rough start to life and he ended up with an absolute fairytale ending.”

Abbott added: “The bond that we have is awesome. We understand each other very well. I’d like to think it was meant to be. He’s special.”