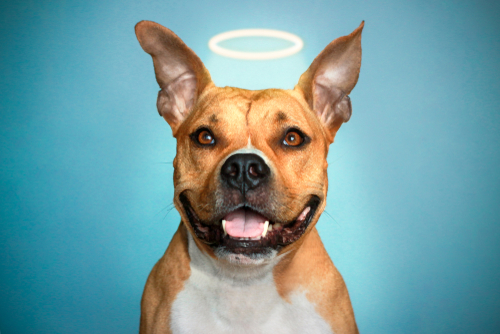 A dog named Jesus who fell into a chilly pond was rescued by firefighters on Good Friday!

The four-year-old Staffordshire bull terrier-mix was rescued from the icy water in Sutton Park in Birmingham, UK, after onlookers called the emergency services.

West Midlands Fire Service said they used a ladder and flotation device to get the dog back to dry land.

Well-wishers on social media made a series of Easter jokes including “He is risen. A bit early” and “Jesus lives.”

Watch commander Nigel Cox said: “There were about 100 members of the public on the bank when we get there, some threatening to jump in to get the dog. The dog had been in the lake for about 30 minutes and was going underneath the water and reappearing, so a decision was made to get a fire fighter into the water to retrieve him.

“The rescue only took five minutes but the owners were overjoyed to have him back.”