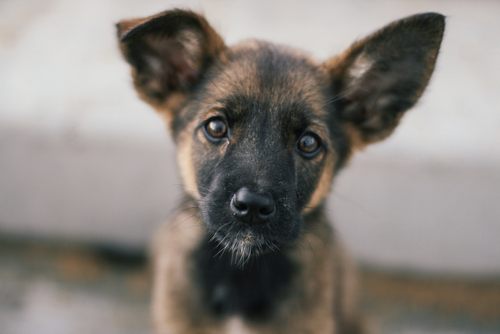 A puppy who went missing 15 months ago and adapted to living wild in the woods was caught by a dog lover who lured him with cocktail sausages.

Pointer cross puppy Rio became spooked while on a walk near Cambridge in the UK in January 2018 and ran into woods where he hunted rabbits to survive. But after surviving on rabbits and other small animals Rio was spotted by Cambridgeshire dog lover Kerry Linsey after she read about Rio on a Facebook group that reunites dogs with owners.

After several drivers reported seeing a stray dog near a busy road in Cambridgeshire, Linsey went looking for him and once she spotted him began feeding him regularly and slowly gained the trust of the dog.

She said: “I would throw down cocktail sausages and bits of chicken and he would follow me. He was being fed once a day, the same time. He caught a rabbit one evening so that’s clearly how he has survived.”

Linsey made contact with the animal charity Canine Capture, and asked for their help in capturing Rio safely, so he could be re-homed.

The charity helped her to set up a trap, which had food at the back of a cage and a door that would be activated when Rio stepped on a sensor.

The plan worked and Rio is now being cared for at a dog rescue center in Surrey.

Unfortunately, his previous owner has now got another dog and isn’t able to take him back so Rio is up for adoption.

Linsey added: “He’ll make a tremendous pet. But whoever adopts him should be aware he is not the kind of dog you can take out for a walk and let off his lead.”