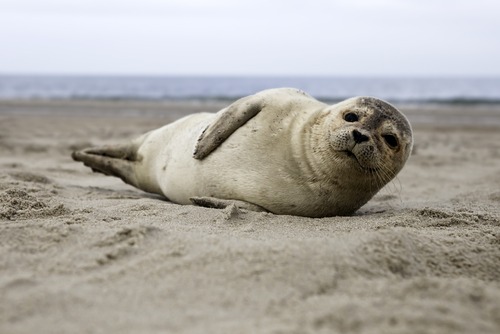 A seal was found basking on a riverbank after swimming 50 miles through Britain’s river network.

The sea animal was spotted so far up river because it was chasing fish.

It was found near Thirsk, North Yorkshire, UK, a good 50 miles from the North Sea coast after swimming up the River Swale.

Experts said it was unusual to see the seal travel so far to catch fish.

A local walker Karen Hargreave said she was “extremely surprised” to catch a glimpse of the harbor seal.

Mrs. Hargreave said: “Some friends of ours went for a walk, and saw something large in the river.

“On closer inspection, they realized it was a seal and as I am interested in wildlife they messaged me.

“I’ve lived here for 30-odd years and we’ve never had anything like this in the river. It was directly on the opposite bank. He hauled himself out and sat there, having a good snooze. He looked like he was really happy.”

The seal was also spotted by walker Tony Wilson, 48.

He said: “It looked so bizarre. At first, I thought it was a sheep but as I got closer I saw he was a great big grey seal.

“I couldn’t figure out how he’d arrived there but speaking to people in the village later it seems he’d swam all the way from the sea up the river.”

A team of wildlife rescuers was called out to the seal but it was later decided to leave the animal and let it make its own way back to sea.

Ana Cowie, of the Living Seas Centre in Flamborough, on the East Yorkshire coast, said it is a common practice for seals to travel along rivers chasing fish.

She said: “It is pretty regular, they just chase the food source and you often find them inland. We don’t have statistics or numbers but it is fairly common.

“If they don’t seem distressed or stranded we would urge people to just leave them, don’t approach them and keep dogs away as they are a wild animal after all.

“They can usually be there for a few days before finding their way back, but they spend a lot of their lives on land so they are usually fine.”