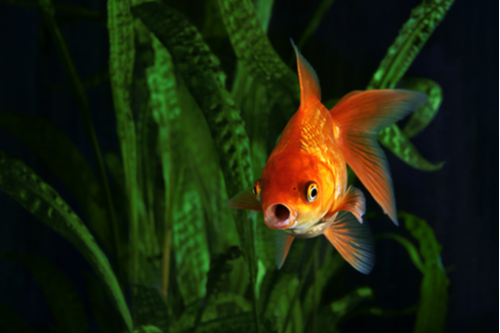 A sick goldfish who couldn’t swim has been fitted with a mini inflatable backpack.

Lemon, an Oranda goldfish, had lost her buoyancy and kept floating to the surface, falling sideways or sinking. Now she has been fitted with a small strip of inflated plastic on her back allowing her to happily swim around and control her balance.

Lemon suffered from an irregular swim bladder, the organ that fills with air and controls buoyancy and balance. Lemon used to lay on her side as her friend, another goldfish called Sanders attempted to fix her buoyancy issue.

Lemon’s swim bladder was too small and Dr. Jessie Sanders at the Aquatic Veterinary Services in California came up with the life belt solution.

The tiny fish was sedated and the float was attached to her back.

After the operation, veterinary officers introduced Lemon to her new tank-mate named Rusty — another goldfish who also had issues swimming.

Dr Sanders said: “Lemon had never met anyone as accident-prone as herself before, and the two fish seemed to bond immediately. They were both very content as two fish who had about the same mobility.”

“As soon as fish realize they can swim effortlessly — especially a fish who’s been on the bottom for this long — they have a very excited response. They are usually swimming around as happy as can be, and trying to test out the limits of their new mobility.”

Fisherman abused by animal rights mob as he saves stingray