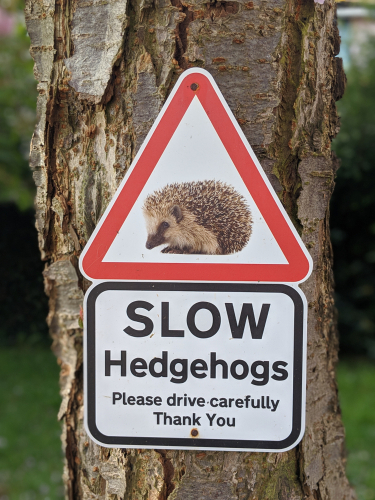 ROADS in the UK have become a safer place for hedgehogs with a warning sign designed to help protect them.

The British government acted after research identified an alarming decline in hedgehog numbers.

The new signs – which show a black hedgehog inside a red warning triangle—will be erected in areas of the country that have large numbers of hedgehogs, otters, squirrels and badgers.

It is part of an effort to prevent road accidents caused by drivers swerving—often unsuccessfully—to avoid hedgehogs on the roads.

They are the first animal in 25 years to be given their own warning sign by the UK Department for Transport.

Previously only cows, sheep, horses, toads, deer and ducks had an official sign on UK roads.

Experts estimate the hedgehog population on mainland Britain to be about one million, down more than 90 per cent since 1950.

A government spokesman said: “The sign will fill a gap between warnings about smaller animals such as migratory toads and wildfowl and large animals such as deer and livestock.”

Fay Vass, of the British Hedgehog Preservation Society, added:  “We are delighted the issue of hedgehogs being killed on roads is being taken seriously.”

Chunkie the Hedgehog Too Fat to Hibernate