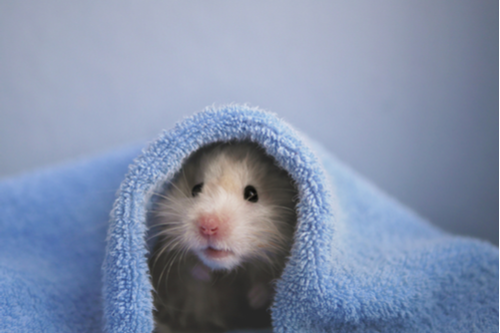 A hamster was saved by an ingenious RSPCA officer after it got trapped in a narrow water pipe for six days.

Animal Welfare Officer Alison Sparkes saved the stricken creature trapped in the pipe by building him a little ladder so he could clamber his way to freedom.

Thrill-seeking Jamie sparked an emergency after escaping from his cage and wriggling into a pipe while being looked after by his owner’s friend in Bridgwater, Somerset, UK.

Six days later, the beige and white rodent was still floundering inside the pipework and so the RSPCA called in. Sparkes realized he could not climb back up the vertical pipe and so she built a tiny hamster ladder with wire mesh and lowered it into the pipe.

It worked and Jamie had clambered back into day light and was none the worse for wear.

Alison said: “Jamie was being looking after by a friend of his owner when he escaped and went down a 10cm-wide pipe that housed the water pipes.

“This vertical pipe was one meter deep.

“We knew he was okay as they had been dropping food down and could hear him eating so I went home and cut a one meter long ladder from some old wire mesh.

“I then went back, fitted the ladder into the pipe and that evening he emerged. Very thirsty, but okay.”