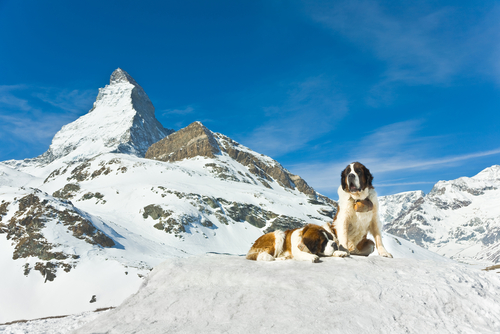 THREE climbers braved plummeting temperatures and the risk of avalanches to rescue two dogs missing for three weeks in the French Alps.

The dogs named Mika and Mungo were saved by three British ski instructors after French authorities gave up the search and said that any rescue attempt would be “too dangerous.”

The two dogs had run away into deep woodland in the and hadn’t been seen since.

But local British woman and dog-lover Leanne Garner suspected they could be alive after going for a hike in a remote area and hearing what sounded like wolves howling.

Convinced the howls were from Mika and Mungo she put an appeal on social media to help find them.

Her plea was answered by Cameron Skinner, 28, from London and Marc Walton, 26, and his brother George, 25, from Berkshire, a trio of British ski instructors who work in the region.

The three men were equipped with ice axes, crampons, and an avalanche probe when they set off to find Mika and Mungo in woodland near Morzine.

They tracked the dogs by spotting birds of prey, which they guessed had seen the freezing animals and were circling for the kill. The trio headed towards the birds and then heard the dogs barking.

Cameron stayed at the base of a sheer crag while Marc and George climbed up towards the source of the barks where the animals were spotted. But Mika and Mungo had become separated.

Mika was easy to reach but Mungo was at the top of a ridge and perilously close to an avalanche area.

The climbers rigged a belay—a safety rope—across the gulley and were able to pluck Mungo to safety and reunite him with Mika.

George who pulled Mika to safety first said: “I think I was just as excited to see her as she was to see me—she was wagging her tail. As soon as she was close enough I put a lead on her and attached it to my harness. I then let her get used to me as we had a long walk down from there.

“Marc had to belay across a gully to get to Mungo, and when he got there, he quickly hooked Mungo on to the rope using a carabineer and sling. The pair were definitely happy to be reunited.”

Skinner, added: “When I found out that the missing dogs might be alive I leapt at the opportunity to try to rescue them. Because they had been heard howling, I knew there was hope. I rang my friends and they were up for it as well.

“We all specialize in ski touring and off-piste skiing, so we are highly trained. We’re trained to rescue people and to spot the potential signs for avalanches. We knew the snow was deep and there might have been an avalanche at any moment. There were three eagles circling at the top of a cliff, which made us think that was where the dogs were, and that they were alive.

“When we got closer, we could hear the dogs barking too—it was echoing around the mountain, but with the eagles as well, we knew where to climb.”

Garner said the dogs were “absolutely over the moon” to see their owners, who did not want to be named.

She added: “There was a two day snow storm. We didn’t want to say it out loud, but there was no way they should have survived. It’s amazing the bravery and courage Cameron, George and Marc showed to go and rescue them.”

The rescuers were given an award by the local Mayor for their efforts, but Walton said knowing the dogs had been reunited with their family was reward enough.