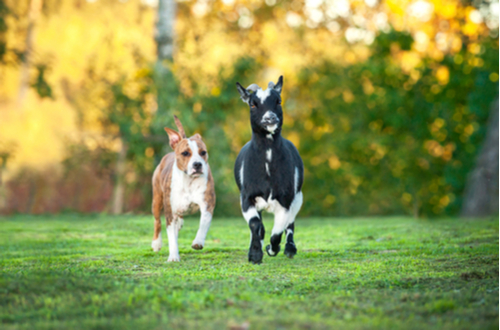 A man whose dog went missing for three days was overjoyed when the animal suddenly came bounding towards him—with a goat and a second dog in tow!

Bo the black Labrador was spotted by owner Kyle Krier racing towards him from hundreds of yards away across a massive field in Concordia, Kansas.

The animal was accompanied by his two new friends—a white Labrador and the goat.

A few days later, it was discovered that the goat belonged to Kyle’s next door neighbors, Chris and Shawna Huggans, while the other Labrador also lived close by.

Bo went missing after Kyle’s wife Laura let him out of the house to go to the bathroom – but he befriended another dog in the yard and they ran off together.

Kyle added: “We looked all over the place for him and could not find him.  We decided to go home and wait for him to come back but he never did. I went out in the morning to look for him and found no sign of him anywhere.”

He had given up hope when reports came in that Bo had been spotted six miles away from the family home. Kyle headed off into the open fields but Bo spotted him first.

Video captures the heartwarming moment as Bo comes running through the cornfield back to his master.