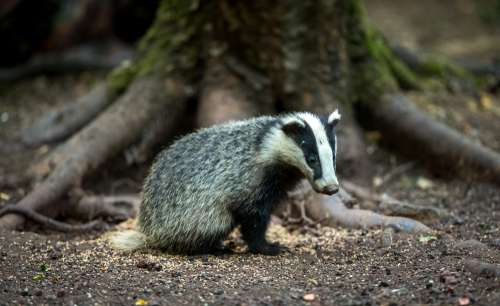 A badger had a miracle escape after plunging 30 feet down a disused well. The animal fell through rotting boards covering the well. When someone spotted the damage fire fighters were called in.

Incredibly, the badger survived the fall intact and when rescuers hoisted him to the surface he scampered off none the worse for wear.

The drama unfolded at Northrepps Hall, near Cromer in Norfolk, UK, when the badger, which had been digging for grubs in moss fell through a rotting wooden cover and into the shaft.

Farmer Simon Gurney, 54, described how he lowered a camera down on a length of string, “only to discover this little chap down there.”

Mr Gurney said: “I then put a bucket of water down on a rope and he lapped it up, so I think he could have been down there for a few days.”

A firefighter wearing bite-proof gloves was lowered down and managed to grab the stricken badger and put it into a bag and it winched to the surface.

The creature was then put in a crate and released into the estate, which has been home to badgers since the 18th Century.

Mr Gurney praised the “fantastic work” of the charity and firefighters. He added: “It was the RSPCA at its best, helping an animal in distress.”

A Norfolk Fire & Rescue Service spokesman said: “We are always happy to assist the RSPCA with animal rescues.”