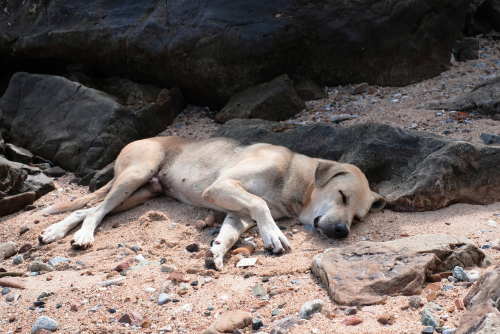 A firefighter made a new pal after plucking a pup trapped under rocks to safety.

A heart-warming video released by the North Charleston Fire Dept. in South Carolina shows the excited pup licking his rescuers face over and over.

A group of passing cyclists had alerted the emergency services after hearing the pup whimpering under the rock pile.

The video shows the firefighter trying to dig down and help to free the stranded dog, but the puppy appears to be afraid and refuses to move towards his rescuer.

The firefighter eventually manages to grab the puppy by its front legs and pull it out of the hole.

Once it became accustomed to the fresh air, the pup excitedly licked its rescuer’s face and the firefighter affectionately pets the dog after its underground ordeal.