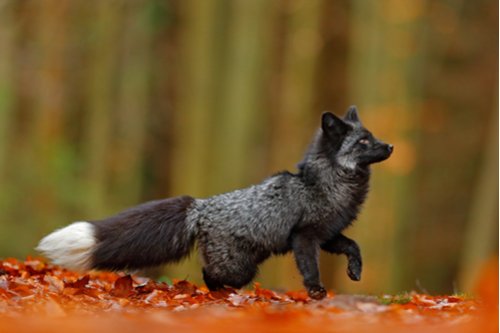 A “very rare” silver fox has been found in the backyard garden of a family home.

The “quite tame and slightly overweight” animal is believed to have been kept as a pet. A family spotted the creature after it ventured into their garden in the town of Alsager, Cheshire, UK.

Former RSPCA inspector Amanda Lovett rescued the fox after the family appealed for help on a community Facebook group.

She took it to the charity’s local center in Stapeley Grange, where staff named the animal Shadow.

“This was on Saturday, one of the biggest nights for fireworks, and we knew we had to get the fox to safety,” said Ms. Lovett, who now runs a nearby cattery.

“I managed to safely catch the fox with a grasper and put him in a cat box before taking him to Stapeley Grange, who kindly stayed open later so he could be admitted.”

Lee Stewart, manager of the RSPCA center, said: “It is likely that Shadow has been kept as a pet and he has either escaped, in which case we need to find his owners, or he has been dumped by his owners.

“He was checked over by our team of vets and was found to be in good health, just a little overweight. He is eating fine and seems to be doing well.”

“He is the first silver fox we have ever had here at Stapeley Grange, in nearly 25 years we have been open. He is an impressive-looking animal and it has been interesting to us all to have such a rare admission.”

The fox, which has been staying with the RSCPA since it was found will be re-homed with a specialist keeper if it is not claimed by an owner.