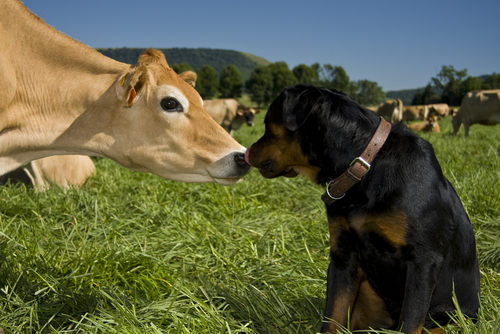 A rescue dog has struck up an unlikely friendship with a blind calf.

Heaven was rescued from a dairy farm in the Canadian province of Alberta, and taken to the Saving Grace Animal Society in Alix, Alberta.

Heaven, who vets think has been blind since birth, was unable to fend for herself on the dairy farm, and struggled to settle into life with the other farm animals.

So in a bid to make her feel more comfortable keepers moved her into a small pen in the back garden of the shelter, which is where she met Sweetpea the bulldog.

And from the moment they met, Sweetpea and Heaven hit it off.

Erin Deems, the executive director of Saving Grace Animal Society, said: “They took to each other and immediately bonded.

“Sweetpea showed her the ropes, as she often does with dogs that we bring in that need extra medical attention. She just kind of latches onto them and kind of shows them the way. I think she felt that Heaven was in the same kind of situation.”

Staff at the sanctuary think that it’s Sweetpea’s difficult past that makes her so good at putting other traumatized animals at ease.

Before she came to Saving Grace, staff believe the black and white bulldog was used as a bait dog in a dogfighting ring.

When Sweetpea first arrived at the sanctuary, she was severely underweight and covered in infected cuts and bruises.

But once she had been nursed back to health, Sweetpea’s affectionate personality shone through, which made her the perfect candidate to be official ambassador dog for the sanctuary.

And now Sweetpea and Heaven have become inseparable. Ms Deems added: “They really love to sunbathe. Sweetpea really enjoys grooming Heaven so she’s always licking her face and cleaning her up as well as she can. “They just really enjoy each other’s company. They’re both going to live out the rest of their days at their sanctuary so they can continue their friendship for as long as they see fit.”

“My Vegan Brother is Insane”

0 comments on “Rescue Dog and Blind Calf are Best Pals”