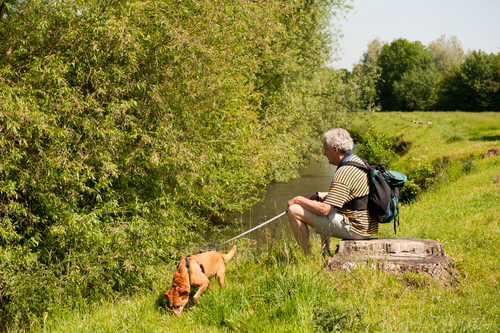 A man has told how his faithful pup helped rescuers find him when he got trapped in a roadside ditch.

Pat Brennan, 62, said his one-year-old rescue pup named Jack refused to leave his side after he fell into the ditch and couldn’t climb out.

Mr Brennan from Portarlington, County Laois, Rep of Ireland, was out for a walk late at night when he fell.

He was too badly hurt to climb out so called emergency services but could only give an approximate location and could not be seen from ground level.

Faithful Jack stood at the top of the ditch and when the emergency services arrived he spotted them in the distance and was able to direct them to his owner.

Mr Brennan said: “When they spotted Jack they knew I must be nearby. I’ve had a stroke in the past so my balance isn’t great and I ended up falling sideways down the bank and out of view. I knew there was no way I could get out and I also feared that Jack might just run off because he’s only a pup.”

Police were quick to acknowledge how vital Jack had been in Mr Brennan’s rescue.

After sharing the story on Twitter, it went viral with over 17,000 likes.

Pat and his wife Melanie had only had Jack for six months after getting him from a rescue pound.

Melanie added: “Jack had followed me home from the shops one day about six months ago and we fell in love with him. “He hadn’t been chipped but we had to take him to the local dog pound in case someone claimed him.

“When nobody came for him we got Jack as a rescue dog, and now he has repaid that favour by doing a bit of rescuing himself.”

As a reward, Mr Brennan said Jack would be getting his favourite meal – a specially made local lamb burger.

This is a link to the Garda tweeted still of Jack waiting outside the ambulance. https://twitter.com/KavanaghMick/status/1141095104490422273?ref_src=twsrc%5Etfw%7Ctwcamp%5Etweetembed&ref_url=https%3A%2F%2Fwww.foxnews.com%2Flifestyle%2Fpuppy-praised-helping-police-rescue-owner-ditch