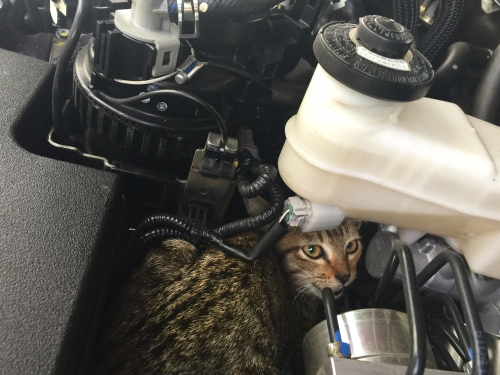 A cat survived life-threatening burns after being trapped in the engine compartment of a neighbor’s car on a 40-mile journey.

The one-year-old tabby cat, named Chi, had climbed into the bonnet of the parked car near her owner’s home in Brighton, UK.

Chi’s owner, Kaylie Banks, told reporters that she had become increasingly concerned when she got home from work and Chi was nowhere to be seen:

She said: “After turning the house upside down I began knocking on my neighbors’ doors. One of them then approached me to say he had found Chi trapped under the bonnet of his car. She was very stressed and my neighbor had to take the grill off the front of the car to get her out.”

Chi had serious burns and was rushed to the People’s Dispensary for Sick Animals in Brighton, a local animal hospital.

PDSA veterinary nurse Sadie Reece, who was part of the team who treated Chi, said: “Chi’s wounds needed to be cleaned and repaired under anesthetic.

“There was a large amount of dead tissue that needed to be removed.

“After recovering from the procedure, Chi was able to go home, complete with a ‘buster’ collar to protect her injuries. She is healing well and is expected to make a full recovery.”

“It’s thanks to the team that she is recovering well and I am grateful to all who helped during what was a very stressful time for me and my family.”

Couple of stills from PDSA website of before and after. https://www.pdsa.org.uk/press-office/real-life-stories/pdsa-vets-save-burnt-kitten-trapped-under-car-bonnet-for-40-miles

0 comments on “The Engine’s Purring Nicely—It’s a Trapped Cat!”