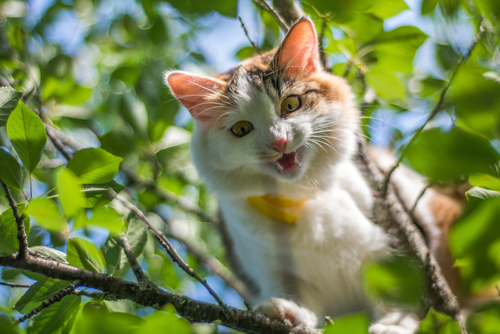 FIREFIGHTERS got the shock of their lives when they scrambled to a “cat stuck up a tree” call. They found a wild mountain lion perched 50 feet up a tree in a residential area—and apparently stuck—when they arrived at the scene in Hesperia, California.

After a period of head scratching they shot the beast with a tranquilizer dart and then used a ladder to get nearer.

The sedated animal was then put into a rescue harness and lowered safely to the ground.

Wildlife warden Rick Fischer, who was involved in the rescue operation, said: “Leaving the lion in the tree would not have been safe for the community.”

The homeowner noticed the cat while working in the yard, and immediately called the San Bernardino County Fire Department for help.

Firefighters arrived several minutes later and secured the area as they worked out how to get the lion down.

The big cat was evaluated by wildlife officials before being released back into the wild.

0 comments on “There’s a Cat Stuck Up My Tree….a Great Big One!”