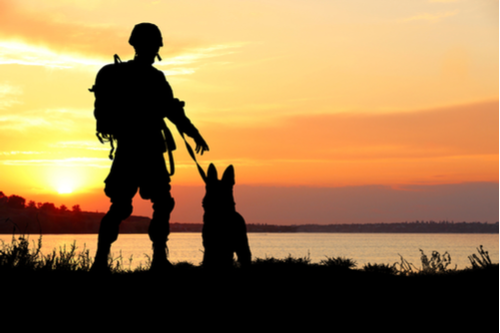 A former UK soldier who rescued a pup in war-torn Syria has been reunited with the animal after they lost touch.

Sean Laidlaw, 30, was in Raqqa as a private contractor when he found whimpering pup Barrie surrounded by rubble after a school had been bombed.

But Sean, of the Royal Engineers, was separated from her when his job was axed while out of Syria on leave.

After raising £4,500 and getting help from charity War Paws, they met at Charles de Gaulle Airport in Paris.

Sean said: “It may come across that I saved Barrie’s life but I feel like she saved mine. To have a companion, it kept my mind away from all the things I was seeing there.”

“Working in a war-zone, coming back to camp you sit in your room on your own. To have a companion, it kept my mind away from all the things I was seeing and doing.”

“You can only imagine how bad Syria is, and to be able to train her for three hours and take her for a walk, things like that really took my mind away from where I was. She stayed with me all day. I’d wake up, she’d come eat with me, she’d sit in the passenger seat when we drove to Raqqa.”

Sean contacted War Paws, a charity based in Iraq which specializes in bringing dogs home from war-torn areas, to find a way to bring Barrie back with him.

He was prepared to fly to Jordan, where Barrie was quarantined, to collect her but War Paws owner Louise Hastie was able to take her to Paris.

Sean added: “It was pure joy when Barrie realised who I was. It was just great to have my dog again.”