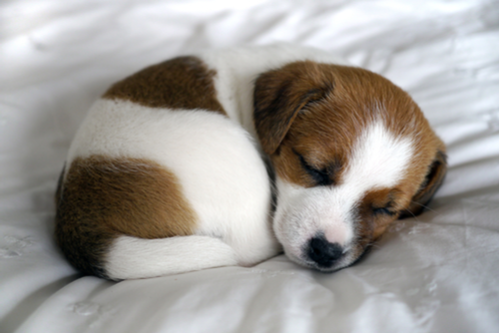 IT was love at first sight when businessman Matt Gorski arrived home and met a rescue pup called George Michael.

Matt from Brooklyn, New York, US, was presented with the new-born pup named after the late Wham star and the two hit it off immediately

It was definitely a case of “I’m Your Man” for Matt who was left speechless after seeing his birthday gift.

He said: “It was a moment of pure happiness, no doubt about it. It was the happiest day of my life. We could not be any more thrilled to have him. He’s just a sweetheart and is so playful. He’s definitely my spirit animal.”

The pup couldn’t stop jumping and kissing his new dad leaving Matt’s girlfriend, Jenna Sacks in tears. It was the moment Jenna had hoped for as the couple had been talking about adopting a second dog for months.

Six-month old George Michael also gets on famously with the couples’ other dog, a six-year-old mix named Ponyo.

Jenna said: “I was crying because it was so cute. If I watch the birthday video now, it still makes me tear up. They were both so happy. Ponyo has been a little lonely since we lost her pit bull brother a few years ago. The difference in her has been unbelievable ever since we brought George Michael home. She’s so much more active now and he’s always following her everywhere.”