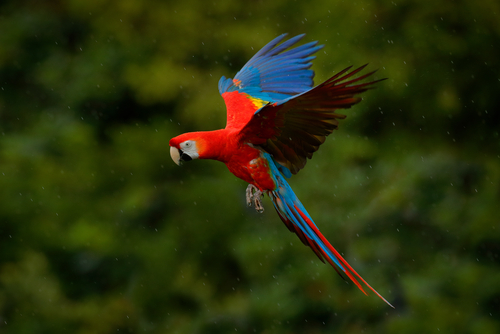 AN Amazonian parrot who was stolen from a zoo has become a national celebrity after fleeing his captors and flying home.

The parrot, named Freddy Krueger, was abducted from a zoo in the city of Cascavel in Brazil but two weeks later found his way home.

Freddie was already well known to the public after recovering from being shot in a gun battle between police and gangsters, which resulted in him being kept in the zoo.

He also survived being bitten by a snake in the zoo so being kidnapped was the latest chapter in a colorful life.

Officials believe the scarring suffered by Freddy in the gun battle meant he was of little value to his captors so they released him and Freddy found his way home.

A zoo spokesman said: “In the shootout Freddy was hit in the upper-beak … blinded and suffered burns to the feathers that grow between the eyes. He’s a bit of a wild one… I don’t know if Freddy is really unlucky or really lucky!”