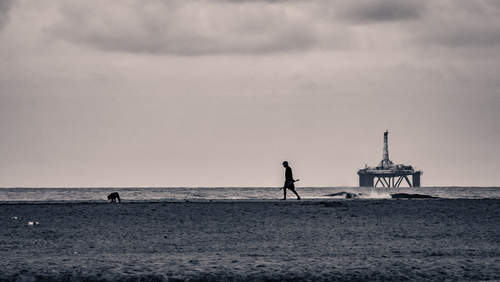 A dog has been plucked to safety by oilrig workers who spotted it swimming for its life 140 miles from land. Disbelieving crew members scrambled down rig ladders and pulled the perishing pooch from the waves as she was about to go under. The brown mongrel was exhausted and shivering when she was hoisted to safety in the Gulf of Thailand.

Crew members have now named her Boonrod—which is Thai for Survivor.

It is not known how she ended up so far out to sea. It is thought she may have fallen off a fishing trawler or jumped off a boat to escape mistreatment.

He said on Facebook: “As the waves were rather calm that afternoon we could clearly see her head as she was swimming toward our oil platform. If the waves had been strong we wouldn’t have seen her. We got a rope around her and pulled her up. We had to race against time as the waves might have swept her away.”

“She looked exhausted. I hope to adopt her as a pet. I am looking forward to spending many happy years together with her.”

Boonrod was given food and water on the drilling platform for two days while rig workers built her a special cage. After she had recovered her strength she was taken back to the mainland where Payalaw is hoping to collect her and take her home.

Lobsters get High on “Sea Weed”