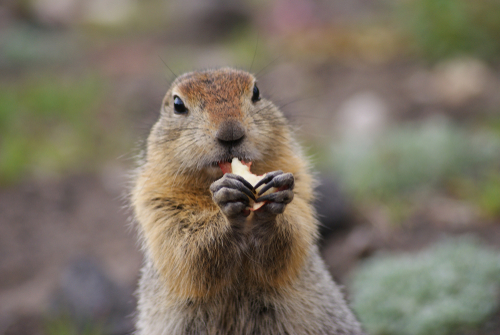 A protestor ate a dead squirrel in front of shocked vegans.

He was protesting against veganism claiming it is unhealthy and wore a vest top bearing the message: “Veganism – Malnutrition.” He targeted a vegan market in London’s Soho district in the UK to stage the protest against the growing trend of veganism.

The same man known as YouTuber ‘Sv3rige’ also ate a pig’s head at a previous vegan food festival in Brighton.

He said:  “My message is that veganism is malnutrition and the reason I and other people eat raw meat is to show what humans eat in nature.”

He said that vegans see veganism as a religion and added: “They blindly believe we can go from eating meat to just eating plants like a cow, but we can’t as humans.”

A spokesperson for The Vegan Society dismissed his claims and said: “It is perfectly possible to get all the nutrients your body needs as a vegan. The British Dietetic Association shares the message that vegan diets are suitable for people of all ages and life stages.”

Police in London said two people were arrested for public order offences but did not confirm if the YouTuber was one of them.