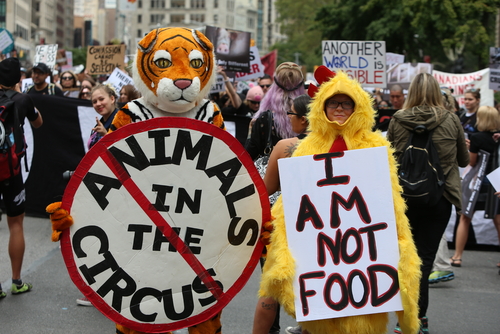 PETA boss Ingrid Newkirk has told how she plans to carry on protesting from beyond the grave.

In a unique last will and testament, she has called for her body to burned as a human barbecue, her skin to used to make wallets and purses and her feet to be turned into umbrella stands.

She hopes the burning of her corpse will be so shocking it will stop people wanting to eat meat. And the she believes human wallets and purses will turn people off leather.

It is the latest in a long line of shock tactics from the life-long activists who said it was a way of continuing her campaign for animal rights after her death.

Newkirk, 70, the president of the People for the Ethical Treatment of Animals, said: “I would like to continue my activism after I die. So I have a lawyer and a pathologist to help me so that if my body is still intact when the time arrives, my will directs that my flesh be fried up for a human barbecue and that my skin be made into purses and other leather products to show that no one wants to be killed to be made into a kebab or a shoe.

“The difference is that I will be a volunteer and give my body parts willingly, whereas animals’ flesh and skin are taken from them by force and they are killed in horrific ways.”

Newkirk, who founded PETA in 1980, is a cult figure in the animal rights movement.

During her career Newkirk has gained notoriety for staging numerous publicity stunts including posing naked, hanging from a meat hook in an abattoir and strapping herself to a rack in London’s Trafalgar Square to recreate monkey experiments.

Many of the stunts have featured either her own nudity or that of models – including scantily clad Peta models serving non-dairy cream at Wimbledon in 2017—which has led to accusations that group demeans women to promote its aims.

One of the group’s key campaigning strategies has been the recruitment of celebrity backers from whom it has gained substantial financial support.

0 comments on “Ingrid Newkirk: “I’ll Keep Protesting From Beyond the Grave””