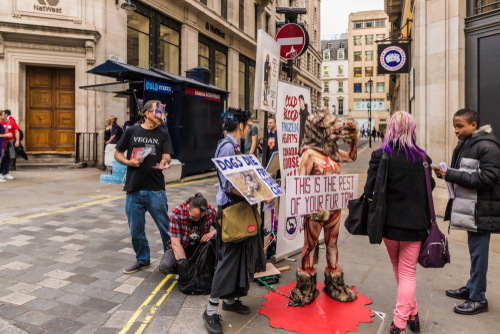 Its London store in Regents Street has been repeatedly targeted by the People for the Ethical Treatment of Animals and bosses have made the move after over a year of disruption. They hope the cameras will capture criminal acts by protestors.

Some Canada Goose coats are trimmed with coyote fur and PETA has been harassing customers and staff continually with as many as three protests a week.

The group has even organized a naked protest outside the store with its members covered in fake blood to symbolize animal slaughter.

Canada Goose said it is committed “to support the ethical, responsible and sustainable sourcing and use of real fur.”

In November 2017, the company sought an injunction to limit the number of protestors who could demonstrate outside the Regent Street store.

Elisa Allen, director of PETA, said: “Trapped coyotes endure a prolonged, painful death, all so that the fur on their backs can be torn off and sold as trim for Canada Goose cruelly produced coats.”

Hollywood stars such as Tom Hardy, Daniel Craig and Emma Stone have worn the brand, whose top-of-the-range parka costs £1,395.

0 comments on “Canada Goose Takes on PETA With Body Cams”