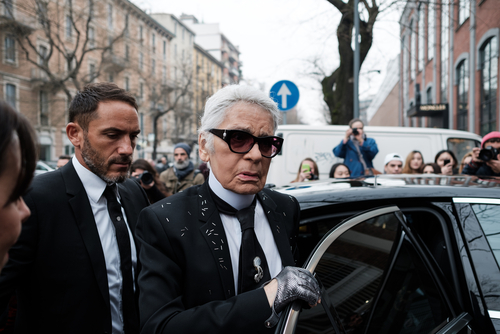 People for the Ethical Treatment of Animals referred to pro-fur Lagerfeld as an “old nemesis” and said his passing “marked the end of an era.”

But the remarks were felt to be in bad taste or a breach of etiquette by some.

The activist group was accused of indulging in “solecisms”—ungrammatical terminology but also meaning bad behavior.

One person tweeted: “PETA is increasingly a masterclass in how not to do PR. Contrary to their ostensible purpose, they make the (otherwise admirable) case for the ethical treatment of animals appear weaker by associating it with their own bizarre, attention-seeking solecisms.”

When Lagerfeld, who had opposed PETA’s anti-fur stance, died aged 85. PETA quickly Tweeted: “Karl Lagerfeld has gone, and his passing marks the end of an era when fur and exotic skins were seen as covetable. PETA sends condolences to our old nemesis’s loved ones.”

In a 2015 Lagerfeld defended the fur industry, stating:  “It’s very easy to say no fur, no fur, no fur, but it’s an industry. “Who will pay for all the unemployment of the people if you suppress the industry of the fur?”

“The hunters in the north for the sable, they have no other job, there is nothing else to do. The problem with fur for me, as long as people eat meat and wear leather, I don’t get the message.”

Ironically for PETA, there was speculation after his death that Lagerfeld may have left his £150million fortune to his beloved cat Choupette.

Lagerfeld adored his little white Burmese who flew by private jet, had a team of maids and ate from silver dishes.

0 comments on “PETA Gets Lagerfeld Backlash”