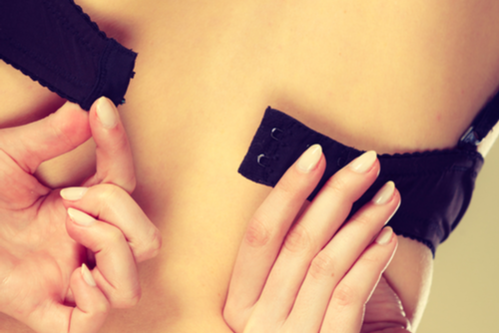 Shoppers and police were intrigued as a bevy of semi-naked female protestors paraded outside the store.

But while the protest in the chilly weather got the attention of shoppers – and police – it didn’t stop them going inside the upmarket winter clothing store and leaving with new purchases.

PETA claims Canada Goose is profiting from the death of coyotes by selling coats featuring their fur. The semi-naked protestors were pictured outside shop’s windows.

The Canada Goose brands logo was also daubed on their backs in red letters dripping blood. A handful of topless men also attended the animal rights rally holding signs that said “Coyotes Suffer for Canada Goose!” and “Fur is Dead!”

Smoke bombs were also set off and a banner unfurled showing a bloodied version of the company logo.

Canada Goose defended its right to sell fur and said its treatment of coyotes was humane. A Canada Goose spokesperson said: “Ethically sourced down, fur, wool and shearling are an important part of our story.  We believe all animals are entitled to humane treatment in life and death, and are deeply committed to the responsible use and ethical sourcing of all animal materials in our products.

“We do not condone any willful mistreatment and neglect of animals or acts that maliciously cause undue pain, injury or suffering. We recently implemented comprehensive traceability programs for both Fur and Down to ensure they are sourced from animals that have not been subjected to any unfair practices, willful mistreatment or undue harm.”

PETA said the protest was the only beginning—and more will follow. PETA vice president Tracy Reiman said: “Every Canada Goose coat represents the suffering of coyotes who were caught in painful steel traps and geese whose throats were slit.

“PETA is calling on shoppers to refuse to give a dime to this cruel company until it stops selling items for which sensitive animals are tormented and killed.”

0 comments on “PETA Gets Naked—Again!”