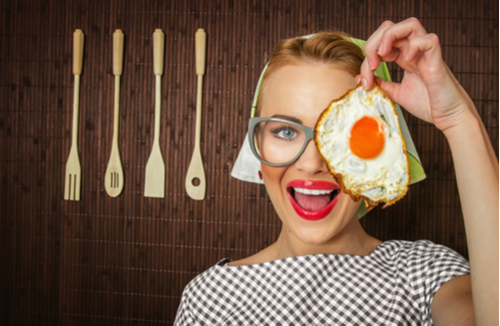 PETA has caused fury by saying that women who eat eggs can’t be feminists.

The animal rights group said eggs represent the sexual abuse of women and urged females to rethink their consumption of milk and other dairy products.

To promote the bizarre campaign PETA has erected a billboard in San Jose, California featuring a blonde woman with an egg in place of her face.

The billboard reads: “Face it — you can’t claim to be a feminist and still eat eggs.

“Eggs and dairy are a product of the abuse of females.”

PETA is referring to the abuse of female animals.

A new PETA video released alongside the billboard claims that consuming eggs and dairy products exploit “females’ reproductive systems and therefore must be rejected by feminists.”

Many social media users expressed their outrage about the new campaign.

Anna Moore said: “I was shocked that they actually put that up there.
“Like, I thought it was actually really stupid. It just seemed really ignorant, honestly.”

Eric Larson said: “I think it’s a bit of a stretch. I think you can respect women and still enjoy a good scrambled egg.”

Ruth Peterson said: “PETA just threw egg on the face of all women. Women not only produce eggs but when cared for and delivered a woman then produces milk.”