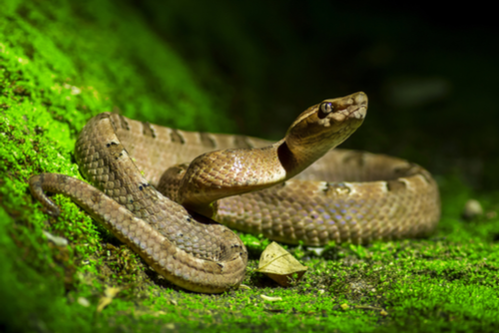 PETA has claimed a TV jungle show is cruel to snakes – because a contestant was bitten by one!

The animal rights charity slammed I’m a Celebrity Get Me Out of Here after a reptile turned on actress Emily Atack.

The star of TV show Inbetweeners was taking part in a trial in which she had to grab tokens inside holes filled with Vipers.

But one of the reptiles bit her and was grabbed by a handler and thrown onto the ground to get it away from the actress.

Fans struggled to watch The Viper Pit challenge in which Atack made her way along a passage, plunging her arms into holes containing angry serpents.

Presenter Holly Willoughby shrieked as the snakes lashed out and viewers also getting severe anxiety.

But PETA said the so-called Bushtucker Trials—a focal part of the UK show often involving animal challenges—were cruel and asked for them to be banned.

The snake was unhurt but Atack voiced her concern for the snake on finishing the task, asking presenters Holly Willoughby and Declan Donnelly: “He nipped me and I pulled him out. Is he alright?”

A Spokesperson for show makers ITV said: “We are in regular contact with the RSPCA NSW who have been notified of all the Bushtucker Trials involving mammals or reptiles – inspectors have an open invitation to attend any trial at any time.”

“At each of the Bushtucker Trials, which feature animals or insects, we have qualified and experienced animal and insect handlers on site and every trial has been carefully tested and developed.”

0 comments on “Snake Bite is Cruel to Snake, Claims PETA”