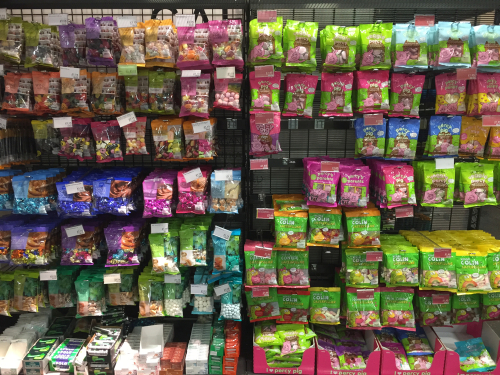 A supermarket chain has caused outrage by changing the recipe of its Percy Pig sweets to please vegetarians. Marks & Spencer in the UK removed the pork ingredient gelatin after animal rights groups such as PETA complained.

But fans of the gummy favorite were furious and claimed the new taste was “disgusting.”

Now the store has hinted at a U-turn and is forming a panel to decide if the original version should make a comeback alongside the new vegetarian option.

M&S said: “We are recruiting 100 mega fans to form the Percy Pig Panel to vote on whether a special edition – a classic Percy pack with the gelatine back in – should be introduced. This would sit alongside all of our other veggie-friendly gelatine-free Percy Pigs. Customers can volunteer to take part in the panel through the M&S Facebook and Twitter pages.”

The moves comes after a massive social media backlash.

One fan blasted the new Percy’s as tasting like a “mouthful of washing up liquid.”

Another declared: “The most sacred confectionary item on the planet is over.”

Percy Pig sweets have a number of famous fans including Andy Murray, Lewis Hamilton, DJ Calvin Harris and Alexa Chung. Percy started in 1992 as a black and white licorice panda.

After a year, the sweet’s classic blend of raspberry, blackcurrant, elderberry, grape, and mandarin, and texture was developed and Percy became a pig. In October 2007 the billionth sweet was sold. The following year, Percy made No. 11 in Vogue’s Top 40 “What’s Hot” list.

The next year tennis ace Andy Murray admitted a weakness for the sweets, and received 30 bags from M&S.

In July 2013, Percy celebrated turning 21, and the birth of Prince George, by turning up at London’s St Mary’s Hospital to hand sweets to TV reporters.

Percy merchandise including cupcakes, cuddly toys and piggy banks has also been a hit.