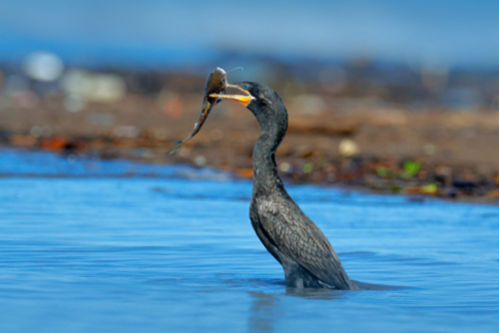 UK ANGLERS have clashed with PETA because they want to be allowed shoot cormorants who keep eating their catches.

Fisherman are reporting growing numbers of cormorants snatching their catches – which they would normally throw back – and killing them. But PETA said the anglers are “talking poppycock” and should instead scare the birds away instead of shooting them.

The Angling Trust wants the Department for Environment, Food and Rural Affairs (Defra) to raise an annual cap on the number that can be killed. The Trust wants them placed on the general shooting license alongside birds such as magpies and crows, which would mean no limit on the numbers that could be killed.

Mark Lloyd, chief executive of the Angling Trust, said the organization was doing “all we can to protect fish and fishing from the rising numbers of cormorants and goosanders on our rivers and lakes.”

The Royal Society for the Protection of Birds (RSPB) said there was no proof killing was more effective than scaring cormorants, a species of large waterbird known for its ability to swim underwater for minutes at a time.

And Peta spokeswoman Elisa Allen added: “Gunning down cormorants to ‘protect’ fish so that anglers can kill them instead – and often for fun, not food – is pure poppycock. Anglers are already responsible for the debilitating injuries that millions of birds and other animals sustain after swallowing hooks or becoming entangled in fishing line, and this move just adds to their kill count.”

But Mark Owen, freshwater manager at the Angling Trust, hit back, citing research this year suggesting a correlation between increased cormorant numbers and a decline in fish stocks in Denmark. Mr Owen insisted the birds do “significant damage” to fish stocks.

He said: “The RSPB accepts the case for predator control when it suits them, and have shot or trapped over 1,000 crows over the last two years in order to protect curlews on their reserves. Conservation principles apply as much to fish as they do to birds, and it’s hypocritical to suggest otherwise.”

0 comments on “UK Anglers in Spat with PETA”