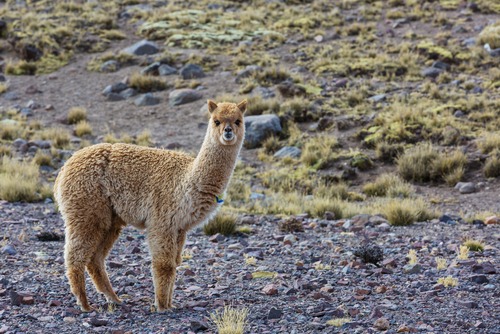 A couple pledged their troth to their favorite alpacas at their wedding.

Chris and Rebecca Giddings felt the need to declare their love for the animal.

The couple from the UK fell for the animals on a 2011 trip to South America.

Chris, 33 and Rebecca, 35, went to Charnwood Forest Alpacas, a Leicestershire breeder, to purchase a £700 “Platinum Alpackage” for their nuptials.

Four alpacas and a pair of handlers attended their barn wedding in Oxfordshire in 2016.

Rebecca, who works in marketing, said: “We went to a lot of weddings in the past that were not necessarily boring, but without entertainment for the guests. We thought it would be nice to do something different.”

“After the ceremony, we went for a little walk in our wellies through the woods to take some photos with the alpacas.”

Making animals an integral part of weddings is a growing trend.

Other popular guests include snakes, spiders, goats, meerkats and raccoons.

Many couples ask for the ponies to be dressed up as unicorns.

Lisa Walker, 42, who founded Mini Pony Hire in the UK said: “Stick a horn on them and it’s even more magical. “People are going crazy for unicorns.”

Paul Freakley and Janet Still, from Warwickshire, hired 30 animals, including meerkats, snakes, tarantulas and scorpions, for their reception in 2015, and were attacked by Pet, which said the animals were “confused”.

The RSPCA has also expressed concern about the use of animals at weddings.

Ros Clubb, a senior scientific manager, said: “We’re particularly concerned about wild animals at weddings, which seems to be more of a recent phenomenon. On the whole, we wouldn’t encourage people to use them. Not just them being there for the day, but being transported to the location and housed on the site.”

0 comments on “With This Alpaca, I Thee Wed”