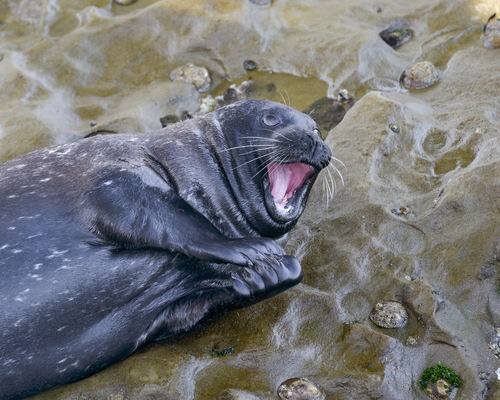 A seal who whose throat was cut when a Frisbee got stuck round its neck has cheated death.

The lucky animal named Pinkafo was saved by rescuers off the coast of England and needed six months of treatment to recover from its wounds.

She has now been returned to the wild after being spotted in distress by the Friends of Horsey Seals and Marine and Wildlife Rescue based in Rollesby, Norfolk, UK.

Volunteers took her to the RSPCA’s center near King’s Lynn where she was treated with antibiotics and salt baths.

RSPCA center manager Alison Charles said: “Pinkafo has had a long, difficult road to recovery, so it is wonderful to see her bound back into the sea where she belongs. The staff and volunteers have put in so much hard work in Pinkafo’s care. Watching her return back to the wild is the result we all wanted to see.”

Pinkafo is the second seal to be wounded in this way. Rescuers found another female grey seal with a Frisbee stuck through her flesh in 2017 and warn that local wildlife will face more problems in the future if people fail to dispose of dangerous plastics safely.

There’s a Cat Stuck Up My Tree….a Great Big One!

0 comments on “Lucky Seal Returned to the Sea”