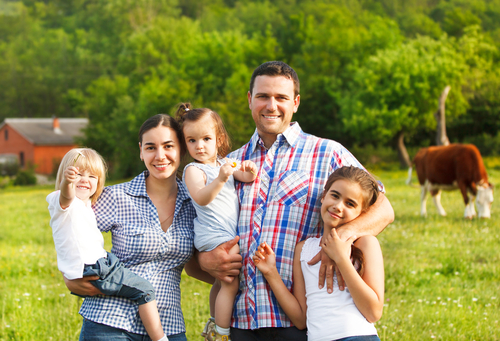 A FAMILY-RUN farm has received hundreds of death threats from blundering activists who mixed it up with a farm at the center of an animal cruelty video.

The American farm was targeted by undercover activists who obtained footage allegedly showing newborn calves being dragged along by their ears and being hit with milk bottles.

But Ian Ledger, who runs Fair Oak Farm in the UK, said his family have received at least 300 messages from angry animal rights activists who have mixed up the two farms. Many of the messages are abusive and threaten violence.

Mr Ledger said: “One person wrote: ‘We’re coming for your throats.’ We’re getting really serious death threats People just don’t bother checking the facts before posting. I didn’t get much sleep the first night as I was responding to every single incorrect tag and putting a cute picture of our sheep up.

“My biggest worry is that, in the click of a finger, we will lose our reputation. We’re a little family business and have built it up ourselves but it could be lost overnight.”

Fair Oak Farm is an award-winning countryside retreat, offering visitors the chance to meet a variety of rare breed animals.

Ledger, whose wife, three children and mother-in-law also live at the farm, said he is worried about the safety of his family.

He said he contacted Instagram to report the messages but he only received an automated response around 12 hours later saying that their guidelines had not been breached.