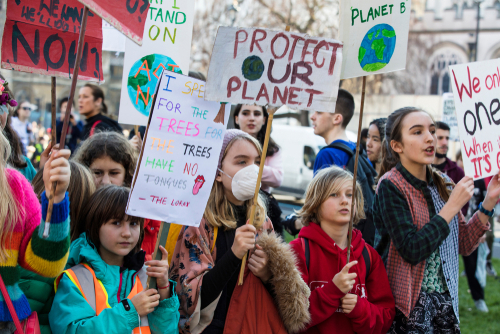 THE co-founder of the climate change group which brought London to a standstill is an animal rights activist who admits she took mind-bending drugs and describes herself as a “neo-pagan.”

Dr. Gail Bradbrook, 47, helped hundreds of protestors from the Extinction Rebellion movement paralyze the capital which saw some members glue themselves to commuter trains. Hundreds more sat in the streets for days causing gridlock by blocking roads and bridges during rush hour and bringing misery to hundreds of thousands of commuters.

Dr Bradbrook, 47, from Stroud, Wiltshire, says she has been an animal rights activist since the age of nine. She said: “Except for a few years when I was too busy being a mother I have been involved in a lot of different things to make the world a better place all my life.”

She has now threatened further action unless her climate change demands are met.

She describes herself as a neo-pagan and said on a podcast that she decided to become an activist as a direct result of taking huge doses of two powerful psychedelic drugs.

Bradbrook, who has two sons aged ten and 13, flew to Costa Rica a few years ago to take a dose of ibogaine, a hallucinogenic shrub found growing in West Africa.

The mother, who has a PhD in molecular biophysics, also tried ayahuasca, a highly toxic, mind-bending potion made by Amazon jungle shamans. She said the drugs “rewired” her brain and gave her “the codes of social change.”

Afterwards, she ended her marriage and began her activism in with Extinction Rebellion.

She holds mystic “moon circles” with female colleagues inside a teepee, at which they ingest another “natural” drug, mugwort, used by ancient Celts.

Bradbrook has claimed that warming in the Arctic will cause the collapse of the food system in just three years—a belief no scientist has endorsed.

She caused fury in the UK when she went on live radio in the middle of the London demonstrations and told veteran newsman Nick Robinson that the protestors were having fun.

Robinson, one of the co-presenters of Radio 4’s morning news program Today, blasted her for causing chaos on London’s streets.

Springing to the defence of commuters he said: “They don’t frankly have the privilege that you do, in order to choose when you can go to work. And they may not appreciate being told they should have fun doing it.”

Bradbrook is from a privileged background and studied molecular biophysics at Manchester University. She founded Extinction Rebellion with her partner Simon Bramwell and has been dubbed the Godmother of the movement.

Three demonstrators were remanded in custody after pleading guilty to a protest on a train and more than 425 others were arrested during the week-long mayhem.