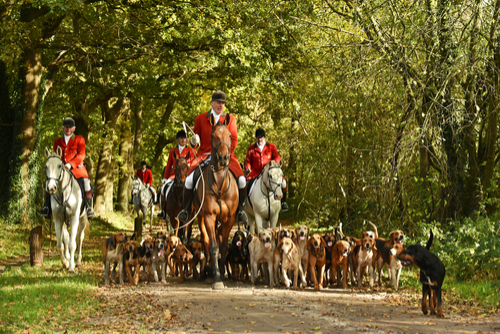 ACTIVISTS have accused the BBC of promoting foxhunting. They claimed the world-famous radio drama The Archers carried a plot line, which encouraged hunting. But BBC chiefs hit back claiming the activists had got their facts wrong.

Archers character Shula Archer had said one of the Radio 4  shows that she planned on going “autumn hunting” to “train the young hounds.”

Activists claimed it was a reference to illegal “cub hunting” and urged the BBC to stop the storyline. However, the broadcaster said it was a references to legal trail hunting, which involves an artificial scent rather than fox cubs.

The BBC also vowed to continue discussing hunting on the program, despite the backlash from anti-hunt groups. The Archers frequently includes hunting storylines, and characters on the program display different views, with Jill Archer vehemently opposing her daughter Shula’s hobby.

In previous episodes, the matriarch has chided her younger family members for going on hunts.

A BBC spokesman said: “When characters discuss ‘autumn hunting’ it is a reference to legal trail hunting, involving an artificial scent not foxes, which the show has also done in previous years. As a fictional drama, The Archers will continue to feature contemporary rural issues, including hunting.”

Chris Luffingham, the director of campaigns at the League Against Cruel Sports, said: “The BBC should be highlighting that cub hunting, referred to as autumn hunting in a recent episode of The Archers, is a cruel and illegal practice which has no place in a modern, compassionate society of animal lovers.”

“Despite hunting being banned 13 years ago, hunts continue to target British wildlife and cub hunting teaches their hounds how to kill and get a taste for foxes’ blood by literally tearing them apart.

“Thousands of fox cubs are killed every summer and autumn in this gruesome practice which exposes the lamentable lies of the hunts that they have stopped targeting British wildlife.”

Before hunting became illegal, hunters referred to hunts held before the official season opened, in which they would target cubs, as “autumn hunting.”

Legal hunts still embark on these early season rides, in which they go through woodland rather than open countryside, but instead of chasing cubs, they follow scented trails.