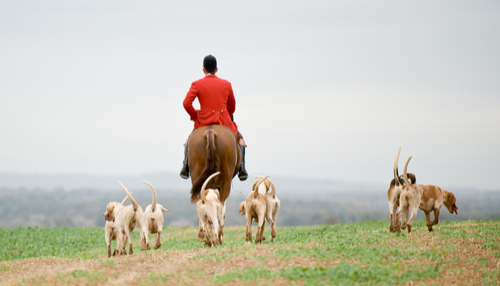 FOX HUNTING opponents have been banned from land used by a hunt following a High Court ruling.

In the first successful case of its kind, Mr. Justice Freedman made the order in the UK. He granted temporary injunctions against a number of anti-fox hunting campaigners after hunt operators complained about trespass and made allegations of intimidation and harassment.

The opponents disputed their complaints and allegations.

Mr Justice Freedman said claims and counter-claims could be fully analyzed at a trial, adding that the injunctions might be lifted following any trials.

In the meantime activists are banned from the Fitzwilliam (Milton) Hunt in Peterborough, Lincolnshire.

A Countryside Alliance spokesman said: “This is a sensible decision to address persistent and unjustified trespass by animal rights extremists. It is unfortunate that the continued obsession of activists with hunts makes such action necessary.”

A similar case was brought against the West Sussex Wildlife Protection group and its activists 10 years ago when lawyers for the Crawley and Horsham Hunt in Sussex requested they were banned from estates where their hunts takes place, accusing the group of “harassment.”

However, it was unsuccessful.

Chris Luffingham, the group director of campaigns, said: “This move begs the question ‘what have they got to hide?’ If the Fitzwilliam Hunt is ‘trail’ hunting as they claim, then why are they worried about being monitored by members of the public?”