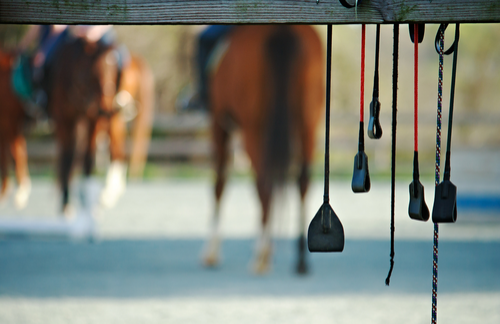 A huntswoman who was accused of whipping a hunt saboteur with her riding crop is facing a private prosecution for assault. The unusual move comes after police decided there was not enough evidence a criminal prosecution and dropped the case.

Jane Goring, 57, is facing a private prosecution for assault during a row caught on camera.

Footage of the incident in Hailsham, East Sussex, UK, in which the sheep farmer can be heard screaming “get off my horse” went viral and was viewed hundreds of thousands of times online.

Police dropped the case over lack of evidence but now Goring—whose husband Richard, 79, is part of the country’s oldest luxury family hotel dynasty—faces two criminal charges through a private prosecution.

During a brief legal hearing at Brighton Magistrates’ Court Goring pleaded not guilty to beating veteran animal rights activists Simon Medhurst who is a member of the South Coast Hunt Saboteurs.

She also denied assaulting fellow saboteur Shirley Makin by “riding her down” with her horse during the confrontation.

Her lawyer Noelle Magennis said both allegations are disputed and that the saboteurs attacked Goring’s horse. She added her client saw Mr. Medhurst outside court and insisted he was not the person she had hit with her crop.

In the unusual case, the prosecution is being overseen by a private criminal solicitor from a Brighton-based law firm.

But District Judge Tessa Szagun asked a representative of the Crown Prosecution Service to review the files. She gave him until October 25 for the DPP to decide whether she will take over the case.

The maximum penalty if Goring is convicted is six months imprisonment.

The alleged attack took place as members of the East Sussex and Romney Marsh Hunt rode out in Hailsham last November.

In the 30-second clip, Mrs. Goring is seen riding towards the saboteurs, who are accused of trespassing on private land, shouting, “get back to the road.”

A masked man takes hold of her horse’s reins and she begins to strike him with her riding whip.

The protester claimed he suffered bruising to his face and head but did not require hospital treatment.

South Coast Hunt Saboteurs launched an online appeal to fund a private prosecution and raised more than £8,000 towards their goal of £15,000.