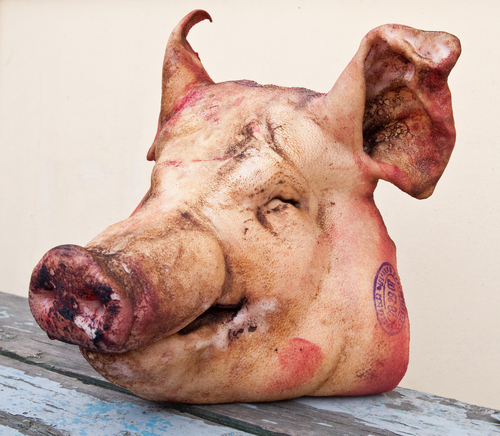 A protestor turned the tables on a militant animal rights group by eating a raw pig’s head outside a vegan festival.

He was surrounded by angry pro-vegan activists but ignored them and gnawed away at the pig’s head.

The protester, who calls himself Sv3rige on YouTube but who is also known as Gatis, said he ate chunks of the raw head in protest against veganism. He was accompanied by other meat-eating protestors who gave him support.

Sv3rige said: “We did it because veganism is malnutrition and you can’t get over 15 nutrients from plants. Some of us are ex-vegans who got sick because of it.”

He staged the demonstration outside VegFestUK, a vegan food festival in Brighton, in response to a campaign of harassment by militant vegan groups.

In November, members of Direct Action Everywhere stormed a Brighton steakhouse and chanted: “It’s not meat it’s violence” as they played sounds of cows being slaughtered. But they were shouted down by a stag party who sang back at them “stand up if you love meat.”

The group also protested by forming a human chain on the turkey section of a supermarket in Hove near Brighton.