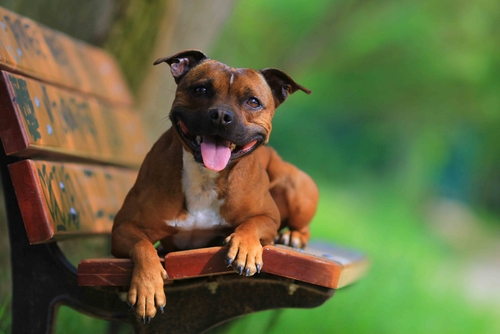 A controversial animal rights group has sparked fury by trying to get Staffordshire Bull Terriers branded as dangerous dogs.

People for the Ethical Treatment of Animals (PETA) has launched a bid to have the much-loved breed added to a list of dogs covered by the UK’s Dangerous Dogs Act.

It successful it would be illegal to own the animal as a pet without special exemption.

The move by the group is an extension of its worldwide policy to end pet ownership of any kind which it claims is cruel to animals.

MPs will now debate the issue before deciding whether to add the breed to the 1991 Act following the PETA campaign.

Dog owners are concerned “Staffies” could be outlawed – and many families forcibly separated from a treasured pet.

More than 180,000 people have signed a petition, calling on the Government to keep Staffies out of the Dangerous Dogs Act.

Steven Quinn, who organized the petition opposing the PETA plan added: “Many people in the UK today have the pleasure of owning a Staffordshire Bull Terrier.

“As one of these people, I can recommend them as being loving, loyal and caring. Far from dangerous, they are great companions.”

“It would be a terrible tragedy for the dog lovers of the UK to lose the right to own one of these great companions. “We are calling on Parliament to save our Staffies and not have them banned.”

Mary Cliffe, who runs New Buildings Farm Boarding Kennels – and regularly looks after Staffies said: “The ones we have are really nice.

“They are probably more human-friendly. Some of them don’t like other dogs. But the ones we have are normally very gentle.”

Dog walker Ray Embleton said: “I don’t think they should be on the dangerous dogs list.

“It depends on how they are brought up. There’s nothing wrong with the breed. I know a lad who’s got a Staffie which plays very nicely with my dogs. Staffies are usually quite soft.”

As well as it being illegal to own those dogs without exemption, the breeding, sale and exchange of them, and cross breeds, is also banned.

PETA submitted its views as part of a consultation launched by the Commons’ environment, food and rural affairs select committee.

The committee is currently reviewing the law on prohibiting certain types of dogs and will be making recommendations to ministers.

A Government spokesman said: “The Government has no intention of prohibiting the keeping of Staffordshire Bull Terriers.”

PETA claims they are the most commonly abandoned breed and the one most likely to be abducted and used by criminal gangs for fighting rings or as guard dogs.

It says it doesn’t want Staffies removed from loving homes and any legislation should allow spayed or neutered dogs to remain in their homes for the rest of their lives, provided they are well cared for.

A PETA spokesperson said: “Given how vulnerable these dogs are to abuse, neglect, and abandonment, why would anyone fight the introduction of legislation that would prevent people from bringing more of them into a world that treats many so cruelly?”