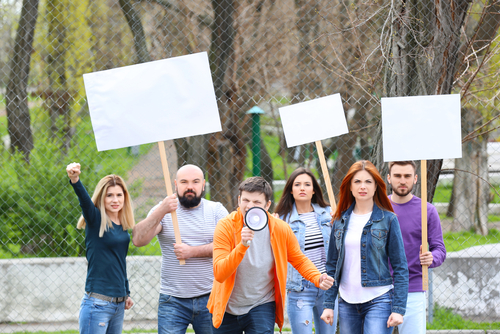 They said the gathering of vegans in Melbourne, Australia, were “making people malnourished” and then started eating the raw meat.

Footage of the men eating large pieces of bloody liver went viral on the internet.

Animal rights activists said the two men had been inspired by the YouTuber known as ‘Sv3rige’ who has eaten a pig’s head and a squirrel at animal rights demos in the UK.

The video shows the men walk up to the vegans, who were standing on the street holding tablets showing alleged animal cruelty videos, and start eating in front of them.

Shocked onlookers began to congregate and film the standoff.

When the vegan activists asked the men why they felt the need to eat raw meat one of the men replied: “Because you guys are making people malnourished.

One onlooker then supported the two men and said: “I think what you’re doing is awesome. The fact that you’ve got the guts to be here to show your perspective, I think it’s awesome.”

The video, which was posted on YouTube, triggered reaction from vegans and meat eaters.

One said: “Vegans are the real savages.”

Another said: “Vegans are annoying. But what these guys did is just disgusting.”

A third person added: “I wonder if he knows how dumb he looks eating that and he definitely is going to end up sick soooo what did he accomplish?”

A spokesman from the Animal Activist Collective group which organised the demo said: “They were encouraged to do this by a YouTuber by the name of ‘Sv3rige’ who they follow as though his word is gospel.”